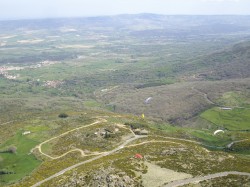 The day started out with early Cu and light winds. Most of the group had a good first flight, most climbing out low from the Chalets (photo). Unfortunately Bruce ended up in some fields further down the slope and ran into the Oak trees at the end on his landing attempt. We decided to return to the glider with a ladder after the second flight, on which many of us floated around the big spine area. When we returned to the glider with a ladder and saw, we were surprised to find a local farmer had already pulled it down from the tree……..no ladder, no saw, just brute force. Luckily the glider was fine with just one skinned line. By 6pm the Cb brewing at the pass moved towards Piedrahita dumping a good shower of rain. No evening flight today.